Another busy day in our household so out came the crockpot again!  Got two busy renovation guys to feed, so I found some halibut and large shrimp in the freezer and bought a carrot, an onion, 3 celery ribs and two stalks of lemongrass, plus a dozen oysters to make a large crock of Seafood Chowder.

Everything tastes better with bacon so I prepped some frying bacon, celery and onion in my frypan and fried the veggies to transparent and glossy, then dumped them into my crockpot.  I had some coconut milk warming on the low setting to set the base for this cream soup.

It will cook on low all day with the lemongrass adding its unique flavour to this soup.  I bruised the lemongrass stalks with my mallet to release the f 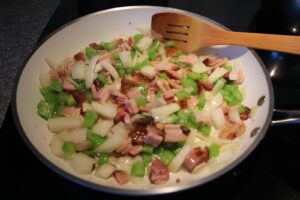 lavour from the stalks, into the soup.  Just before I put the fish in about one and a half hours before serving, I will pull out the lemongrass stalks as they are inedible.  A little sprinkle of smoked paprika adds a nice finish to round out this Seafood Chowder.  I do not generally follow recipes to the exact ingredient but rather I adapt them and add my own spin.  Lots of fun! 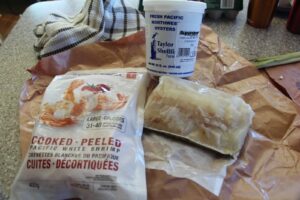 The oysters are fresh but were reduced 30% because they were close to their expiry date for optimum freshness so they were a good buy.  Both the guys love oysters so they will add a very rich flavour to the soup.  For all you Paleo people out there, this recipe is 100% Paleo and I adapted it from a recipe that does use dairy for the soup base.  Coconut milk is perfect and is creamy and just a bit sweet without a heavy coconut taste to compete with the fish in the chowder.

We work with weight loss clients, osteoarthritic clients, post- surgical clients (hip, knee, back and shoulder), seniors and adults who may be new to weight training. We also work with those who want to increase their muscle mass and bone density while decreasing body fat. We have several athletes we work with to keep them in top shape for their sport, such as marathon running, hockey, curling and soccer. We do many types of fitness training such as strength training with dumbbells and kettlebells, HIIT training intervals with body weight and resistance, TRX training, circuit training, medicine ball and stability ball training, core training, resistance bands training, agility, flexibility and balance training.

We offer all new clients a FREE 1-hour consult to discuss your health goals. We have day time, evening and weekend spaces available for booking fitness and nutrition sessions. Email Michelle at michelle@agelessfitness.ca for more information.

We have seen excellent results in our clients who train within their own homes or their chosen gym facility in the city. Please check out the "Testimonials" section to see what our clients have said about us!

At the core of our beliefs, is the fact that if you are 85% compliant with eating healthy and whole foods, that you will see and feel changes within 3 weeks.

Proper nutrition works in concert with a regular exercise regimen and in order to reach your goals, you need to get your food working for you so that you have energy to fuel your fitness workouts and see results quicker. If you are not seeking nutrition coaching at all, we are happy to work with you on fitness training only.

We offer a reasonably priced and comprehensive nutrition session package which will help you to achieve your goals even faster when you partner whole foods, a simple food plan and our nutrition workshops with shortcuts and tips to save you time preparing your food.

Scroll back to top